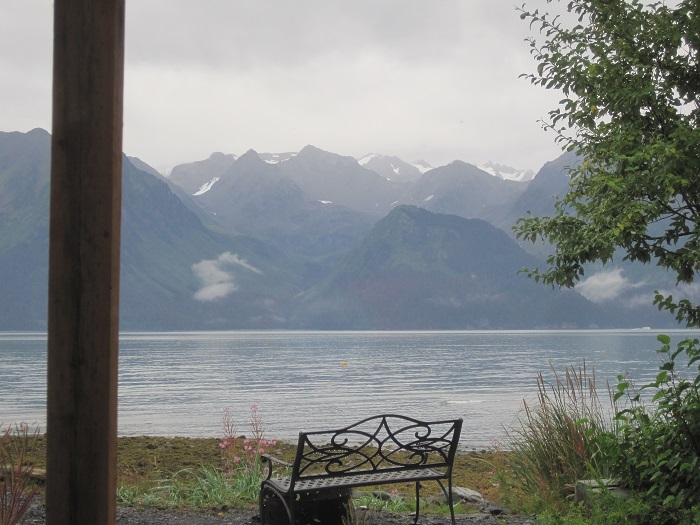 We were flying to Anchorage, the starting point for our two-week vacation in Alaska. And because “vacation” is the operative word, the forecast was, of course, for rain.

And since it’s Alaska, let’s expect some snow during our summer vacation, shall we? Why not!

From the plane, the panhandle of Alaska gave us stunning views of mountains, shimmering lakes, and snow. But as we neared our destination, clouds gathered and blotted out the majestic peaks and green valleys. We descended, diving down into the white-out, until suddenly the wheels were skidding across the runway.

Alaska! We couldn’t wait to get right into the middle of it.

In the rush to start our adventure, Martin left his jacket on the plane. You just can’t venture into Alaska, even in the summer, without plenty of warm layers. So he ducked back up the hallway from baggage claim, ignoring the conspicuous “Exit Only!” and “Do Not Enter!” signs, intending to slip onto the plane and grab his jacket. He made it about two steps before being stopped by a veritable wall of stern-looking, beefy security guards. For a bunch of big guys, they sure materialized silently, from seemingly nowhere.

They take their “Do Not Enter” signs very seriously. No bypassing Security to sneak onto airplanes! Which, of course, is a good thing. We decided we didn’t really want that jacket after all. It’s summer! We’re good, right?

Within moments though, a stewardess strolled down the hallway sporting a big grin and not one, but two, forgotten jackets. “Yeah buddy, you’re not special,” she joked as she handed it to Martin. 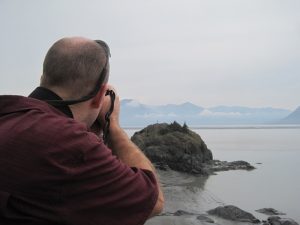 All gear intact (well, except for a crushed bottle of shampoo quietly and busily leaking its contents into our bag), we climbed into our rental truck and headed towards Seward, driving along Turnagain Arm under cloudy skies. The tide was out, exposing a vast plain of mud flats. Apparently the tide can rush in as a monstrous six-foot wave, called a bore tide. Our guide book instructed us to inform “children and morons” to stay off the deadly plain.

We stopped frequently to take pictures, passing lakes and rivers as we twisted our way down the Kenai Peninsula, the road clinging to the water’s edge. Starving, we stopped at a Subway and inhaled hot goopy pulled-pork sandwiches, plus chips, plus drinks, plus cookies. All that plane-riding and car-sitting makes you so hungry!

And so, in due time, we arrived in Seward, Alaska, a town our guide book described as an “unpolished gem.” An unassuming (indeed, even a tad scruffy) fishing village, Seward is squeezed onto the only available bit of flat land. Mountains wrap their arms around the town; Resurrection Bay crowds its feet.

I was pretty sure the scenery was amazing, but I couldn’t really tell. All I could see was white mist and fog, occasionally accented with dark mountains and bay.

We were staying at Angel’s Rest Resort, a group of gorgeous cabins right on the water. The gleaming wood, huge windows, vibrant flowers, and cozy rocking chairs were inviting, but instead we dumped off our bags and headed straight out. 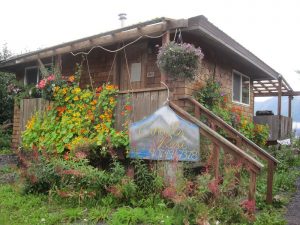 We walked along the rocky shore of Lowell Point, the kelp exposed in the low tide. We saw a few dinner-plate-sized jellies, spongy and gelatinous. We searched for sea stars and crabs; we oohed and ahhed when the fog parted briefly, affording us glimpses of impressive mountains across the bay.

One-and-a-half hours after arriving at the cabin, the rain started in earnest.

According to the forecast, that stroll along the shore might have been our only dry 1 ½ hours for our entire week in Seward.

But that’s okay! We snuggled into bed later that night and listened to the pouring rain, giddily aware that we were finally in Alaska, perched on the edge of a glorious bay and surrounded (I think) by incredible mountains. Maybe we’ll see them at some point.

The rain wasn’t dampening our spirits one bit. Bring it on! We were in Alaska and feeling good.

15 Comments → Seward, Alaska: Getting There