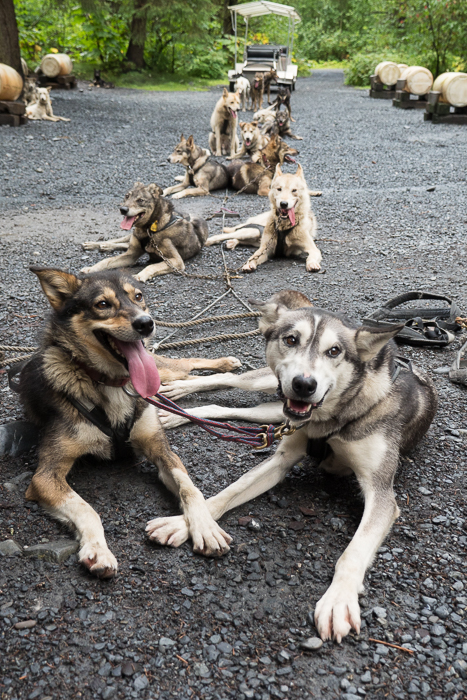 We were rushing breathlessly down the trail, the last ones to arrive for the 10 AM group tour of the Seavey Sled Dogs. The Seaveys are a multigenerational family of dog lovers and Iditarod champions. The Iditarod— a grueling 1000-mile dogsled race across the face of Alaska— takes place in the freezing dark of Alaska’s harsh winter. Only the most intrepid even attempt it. Only true champions finish. The Seaveys have done it— have won it!— multiple times. We were here to get a tiny taste of the Iditarod by being pulled in a wheeled cart by the famous dogs themselves.

We joined the group and tromped down the trail. Our guide stopped before reaching the kennels; one of the sled dogs was on display, standing on a large box while the guide talked about the dogs, the brutal race, the Seaveys—

Actually, I have no idea what he said.

I was totally transfixed with the dog. I inched closer and closer, pushing my way gently through the crowd, and ended up crouched before him, petting him, whispering to him, touching my nose to his, while the guide prattled on about who knows what. I don’t think he was saying, “Don’t touch the dog” or “Step back, please” or “Hey lady, give the dog some air!” because Martin would have intervened and dragged me back.

It was lovely to get a good dog fix. However… this dog was a lot thinner than I’d expected. And his coat wasn’t thick and fluffy. He had absolutely no fat, no padding, no heavy fur— how could he stay warm in this frigid northern environment? And he was a little dirty. He looked fine— bright-eyed, happy, alert, not bedraggled or matted— but my hands came away brown with dirt.

Huh. I guess these dogs aren’t “pets,” they’re sled dogs and marathon runners. They don’t lie around getting shampooed and brushed and perfumed. This little summer stint of theirs— pulling exhilarated tourists around in a wheeled sled— is training for them, keeping them strong and fit for their winter race. It also serves to train new dogs on a known course, plus it makes the dogs happy to do the job for which they’re bred: pull sleds. They want to run and pull.

And they do! Every day!

Happy dogs, right? Still… I like warm, well-fed dogs with a nice little fat padding on them, to show they’re getting plenty of goodies… Were these dogs really treated well?

The guide finished saying whatever he was saying, and led us further down the trail to the kennels themselves. And again, I felt a little jolt as we rounded the corner. I had imagined comfy living accommodations befitting champion dogs, veritable palaces with thick cushy beds and overflowing food bowls. Or maybe a big fenced yard where they could all romp, play, and wrestle with their friends in their down time.

But these dogs were chained to their kennels, unable to interact with their neighbor. And each kennel was just a plastic barrel that the dog could curl up in. It didn’t seem very warm or cozy. And they were all so thin, jeez! Not big fluffy dogs, but lithe and wiry. Skinny, even. I wanted to give ’em some treats, feed ’em more food!

Fatten those dogs up a little!

I guess I want to turn every dog into my own dog Jasper: nicely padded, fluffy, a big ole happy dog who lumbers onto the couch after an enormous meal, collapses with a satisfied grunt, and takes a snoozy nap before being fed his after-dinner treat.

These dogs are marathon runners. And human marathon runners, I realized, tend to be lean too, almost scrawny-looking. Just like these dogs. Upon on further inspection, I saw the kennels were clean, free of dog poop or mess, and every dog had a big pail of clean water accessible.

And the dogs themselves! They looked happy. Bright-eyed, alert, enthusiastic, these dogs were clearly well-cared-for. They weren’t listless or depressed. As we came into sight, the dogs almost universally stood to greet us, watching with interest, huge smiles on their faces, tails wagging with anticipation. The guide led us towards the wheeled carts, and with rising excitement the dogs began pacing around and yipping; tail-wagging speed accelerated significantly. The guide settled us into the carts, and the dogs went nuts, leaping into the air, barking wildly, straining at their chains, creating an unbelievable ruckus. Each one was howling, “Me! Pick me!”

Eight dogs would be chosen. They all wanted the job.

The lucky dogs were selected, put in their harnesses, and clipped to the sled. They could hardly stand it, they were so excited; as soon as a dog was in his harness, he started pulling. We could feel the sled shifting as each dog was added, despite the brake being fully on.

Those skinny dogs are strong.

And then, when the dogs were all harnessed and leaning hard into their traces, listening attentively, quivering with excitement, the guide released the brake and shouted, “Go!” and the dogs leaped forward as a single unit. Suddenly we were flying through lovely fall foliage, eight dogs running wildly for the sheer joy of it, ears back to hear “Gee!” for right and “Haw!” for left, flying down the gravel trail doing exactly what they were bred to do.

It was a 2-3 mile track; we stopped halfway to let the dogs rest because it was “so hot” outside. I raised my eyebrows. The temperature was about 50-degrees! I was all bundled up. But apparently these dogs do much better in colder weather. They had suffered earlier this summer when there had been a “heat wave” of 70-degrees. Large shallow tubs of cold water had been placed at this spot, so the dogs could lie down and cool off.

We finished the loop and the dogs lay down, happy and panting. Each dog might run three times per day (six times per day in peak tourist season), for a total of about 130 miles per week. I went down the line, thanking every single dog, petting him or her appreciatively.

Their days are filled with running and pulling sleds with obvious joy, being fawned over by hundreds of tourists, resting briefly before yipping for another wild run, all the while training for an amazing winter race with their champion people— yeah, these Seavey dogs have it pretty good.