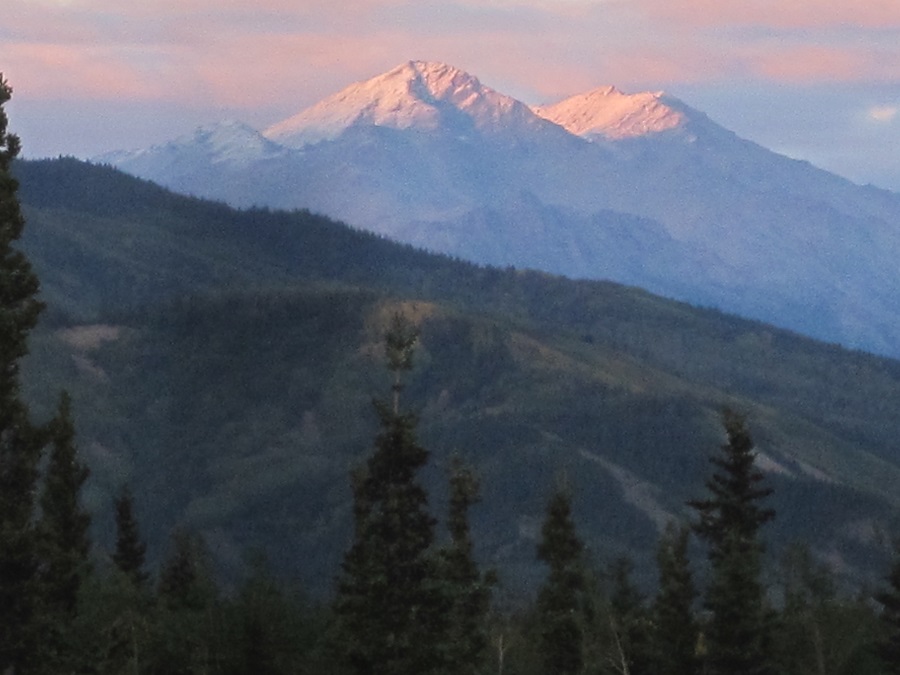 Today we would leave our gorgeous cabin in Seward and drive through Anchorage and beyond, about seven hours north, to the town of Healy, perched on the doorstep of Denali National Park.

Seven hours of driving? We better be fortified! We stopped at a little coffee shop on the edge of town, where the clerk took our order for coffee and scones. That should do it for seven hours, right? As she handed us the bag, she chirped, “Scones are still warm, freshly delivered by the bakery/hardware store!”

Come on in! Get your blueberry muffins here! Would you like nails or screws with that? Half-price sale today on all cinnamon rolls and garden hoses!

I love Alaska. It doesn’t do anything like everyone else.

We drove up the Kenai Peninsula, fog drifting in and out of the green-clad valleys. Sometimes the sun broke through, making everything glitter and shine. Martin was in a mild panic, feeling the urge to linger in these areas and photograph the beauty, while also recognizing the need to keep driving– seven hours!– and get there.

He finally succumbed to the scenery at Turnagain Pass near Anchorage. A beautiful green meadow bejeweled with wildflowers and ethereal fog could not be passed without stopping.

I love Alaska. It definitely doesn’t do roadside turnouts like anyone else.

In Anchorage, we darted into an REI store for a whirlwind spending spree. If we were going to survive our summer vacation here, we needed heavy wool hats, expedition-weight long johns, and thick fleece jackets. Highs in Healy were predicted to be in the 40s, with possible sleet and snow.

This is the coldest summer vacation I’ve ever taken. Alaska certainly doesn’t do summers like anyone else.

Winters either, I imagine.

At Martin’s insistence, we stopped an hour later for food in Wasilla. Our guide book indicated that groceries were “limited and expensive” in Healy, and suggested that travelers stock up either in Wasilla or Fairbanks. I was skeptical; actually, I was downright dismissive. It was ridiculous to buy food in Wasilla, more than three hours from Healy! People live in Healy. They have to eat – there’s gotta be a grocery store there!

I waved my hand airily, and Martin undoubtedly braced himself for my standard response: Travel guides are just that, guides. A bunch of suggestions! Who says we actually need to follow them?

Unfortunately, I take the same cavalier approach with cooking; results are often unexpected and lively.

Martin held firm; we bought groceries in Wasilla. We later discovered that in Healy one could buy “food” (word loosely used!) at the gas station’s little mini-mart. Or you could venture into the windowless tavern– with the word “GROCERIES” emblazoned on its roof– and see what you might scrape up in there. Either way, “limited and expensive” was an understatement. It’s wonderful having a smart husband who does things like consider the travel guide’s advice. We have the book, we might as well follow it!

Apparently, Healy is moving up in the world, boasting an actual grocery store in town. One no longer needs to go to the local bar for milk.

North of Wasilla, we came to another stunning roadside turnout. There was a pretty lake with an amazing snow-covered mountain in the distance. massive and bulky, a veritable giant, all shoulders and muscle. It was Denali, the highest mountain peak in North America, standing proudly at over 20,000 feet above sea level.

I love Alaska. Its roadside turnouts are definitely unlike anyone else’s.

Denali teased us from there, popping in and out of sight as the road twisted through valleys, always beckoning us northward. The landscape flattened out, spreading out and away into wide sweeping plains dotted with lakes or glacial rivers. People living here would likely feel claustrophobic visiting Seward, the way the mountains crowded down to the water’s edge, the town clung to the one piece of flat land, and plants grew all on top of each other. Up in this wide open landscape, you could see for miles.

We saw, and passed, the turn-off for Denali National Park. Soon after, weary and travel-worn, we presented ourselves at the cabins’ rental office in Healy. When I’d made the reservation months ago, I’d been thrilled to hear the owner enthusiastically talk about “all the moose” on the property. So I brightly asked the kid at the counter, “Think we’ll see any moose?”

He looked doubtful, then shrugged. “I don’t know,” he said, “considering that moose-hunting season starts tomorrow.”

It felt like a punch to the stomach. Moose-hunting season? Visions of moose herds grazing placidly outside my window vanished. Would we instead see men armed with heavy rifles and scopes sneaking among the trees? Would we, distressingly, hear gun shots ringing out at all hours? Would fellow renters proudly haul bloody carcasses down the driveway? Desperate as I was to see moose, I now urgently wanted them to stay safely hidden and far, far away. Don’t come anywhere near here!

Think whatever you want, judge if you must, but this was going to seriously traumatize me.

I suddenly remembered the cabin website describing its “native Alaskan décor and taxidermy.” Would a dead moose (or any big mammal) be staring glassy-eyed at me from the wall? I would not be able to sleep with a dead animal’s head looming over me.

And for the record, we never heard any gunshots, nor did we see any bloody carcasses. We only saw vast herds of happy moose browsing in the park, which was pretty much the whole reason we came here.

Still rattled from my conversation with the kid, we stepped into our cabin, and I felt another stab of disappointment. We had just come from Angel’s Rest in Seward, beguiling cabins so lovely that likely no place would measure up to it.

But still. This room looked like an uninviting hotel room. It had two beds, a small refrigerator crammed in a corner, and a table with folding chairs. Come on, folding chairs? Overhead, blinding fluorescent lights made us look even more haggard than we actually felt. A bathroom sink stood incongruously against the far wall. Why wasn’t the bathroom sink in the bathroom, where it belonged?

There was no place to put away clothing or store food items. The cabin wasn’t cold at the moment, but the thermostat looked rickety, possibly non-functional. Snow and sleet were in the forecast; we were sure to get cold and wet. We needed a warm cabin.

And what about the kitchen? We had a truck full of pre-made soups, oatmeal packets, refried beans, and herbal tea. Where is the coffee pot and cooking utensils and, importantly, the microwave? We needed hot food.

Ah, here’s the microwave. Stuck inside the closet.

Seriously. In a closet.

Did I mention that Alaska doesn’t do anything like anyone else?

But then we settled in. We discovered the thermostat did work. We found that the sink light and nightstand light provided perfectly-adequate and infinitely-preferable lighting to that of the harsh fluorescents. We could wash our dishes in a bathroom sink just as well as a kitchen sink.

And we could cook in a closet.

It was all going to work out.

I should hasten to say: I believe the cabins have since been renovated. Judging from photos, guests will now enjoy a bona fide kitchen sink, counter space, shelves, and even a dishwasher. No oven or stove, but there’s still a microwave, and it’s not even in a closet anymore. So go to Healy, there’s no reason not to.

Denali National Park was around the corner. Adventure awaited us.

What am I saying? Adventure doesn’t await us.

We’re smack-dab in the middle of it.