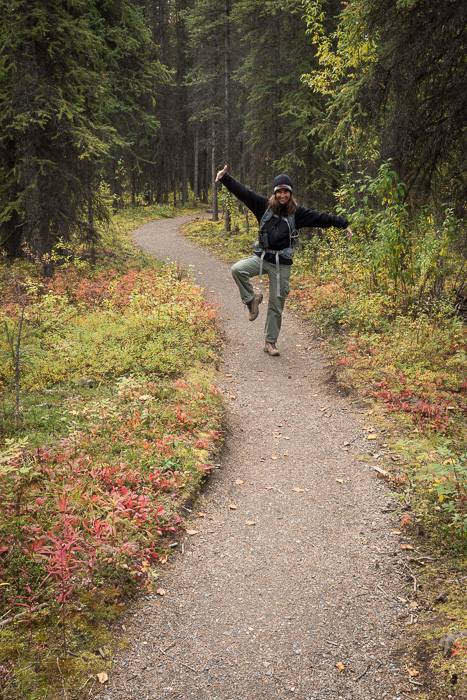 We were feeling overwhelmed.

Standing at the counter in Denali National Park’s crowded Wilderness Access Center, we had intended to buy bus tickets into the backcountry. One road snaked deep into the park; the ticket allowed you to get on and off any bus, anywhere you wanted, and explore the backcountry, as far in as your purchased destination.

But apparently we didn’t fully understand the system. Yes, one could hop on and off any bus, the ranger patiently explained. But we must first choose a specific departure date and a specific departure time. Buses left every hour. Which bus, exactly, would we be on? The ranger’s fingers hovered over the computer keyboard, ready to punch in our answer, while a long line of people waited behind us.

I hadn’t anticipated needing exact dates and times. In retrospect, it makes sense– they don’t want to oversell any one departing bus. But we felt pressure as we stood there talking to the ranger, holding up the whole line as we tried to sort out the information in our heads. Quick! Which bus, what time? So we stepped aside to discuss things.

It felt like a stressful start to our day.

After talking it over, we got back in line and bought two bus tickets to the Eielson Visitor Center, 66 miles deep in the park, for tomorrow at 8 AM.

Next stop: Denali National Park Visitor Center! We thought we would browse through its exhibits, learn interesting facts, maybe buy a book. But as we stepped inside, we discovered it was an enormous two-story structure. Display after display on natural history, geology, and park history vied for attention. There were whole rooms of books, toys, gifts, and clothing. One could buy maps, sign up for a ranger talk, watch a natural history movie, and learn about a million different things. Crowds of people jostled for position, viewing exhibits, tromping up and down the stairs, talking happily and noisily.

It was huge and loud and overwhelming.

A few minutes later, Martin and I looked at each other. This was too much for us. We’d been stressed at the Wilderness Access Center, and were feeling stressed again.

We had to get outside and find a trail.

Luckily, that was easy to do. Several trails snaked away into the trees. We found ourselves on Triple Lakes Trail, chosen simply for its length (with eight miles of trail, we could go as far as we pleased) and the sheer beauty of its name.

With relief, we stepped onto the path. No confusion for us on how to navigate a trail! It was a cold, leaden day, but we were warm in our fleece hats, long johns, and heavy jackets. The trail wound its way through lovely fall color: low-growing red ground cover and shrubs, interspersed with lush green moss and tall green conifers, with astonishing stands of brilliant yellow aspens.

We wandered slowly, as we always do, taking pictures and videos, savoring the fresh air, relishing the quiet. We crossed Hines Creek on a wooden bridge and continued making deliciously slow progress, birdwatching and scenery-viewing.

Soon after, we arrived at Riley Creek, a larger creek rushing swiftly over stones. A suspension bridge spanned the creek, and I joyfully tried to get it to sway and bounce as much as possible. Martin wanted to get footage of us walking back and forth on the bridge; I ruined numerous shots with my cackling silliness. Poor guy, I do that a lot.

This is why we make no forward progress! This is why it takes us an hour to go five minutes’ worth of distance, why we’re so unbelievably slow! We stop, we peer, we photograph, we record, we point, we laugh, we listen, we breathe… we take another step… and we repeat.

The trail continued through the forest, eventually looping back to Riley Creek. We plopped onto friendly round river rocks and pulled out our sandwiches for lunch.

I was a little worried about the turkey.

It had made the long trip from Seward to Healy, about ten hours of travel, unrefrigerated. It had just spent another four hours further ripening inside my daypack. Was it spoiled? I sniffed at it dubiously, then took a tentative bite. It seemed okay, but I sure didn’t want to discover, too late, that it wasn’t. We were taking an eight-hour bus ride tomorrow, 66 miles into the backcountry.

I did not need a violent case of food poisoning.

I couldn’t help it, my brain touched – disturbingly – on the scene. Stuck helplessly on a bus – no bathroom, no water – with increasing nausea, climaxing in projectile vomiting and explosive diarrhea. A wholesale, uncontrollable evacuation of all gastrointestinal contents, from both ends. For hours, since that’s how those things go.

Martin, suddenly in a completely different seat, vehemently disavowing all knowledge of me: “I’ve never seen that woman in my life! Just get her off the bus!”

The horrified passengers, backing away. Taking cover behind seats, scrambling through open windows, attempting to climb outside onto the roof. Anything to escape.

The panicked bus driver, glancing in utter disbelief at the spectacle in his rearview mirror, hauling ass down the road, gravel flying, desperately searching for water. How can one small woman eject so much fluid? Surely there can’t be more!

Although it would certainly be a memorable trip, wouldn’t it?

It was 2:00 PM now. The bus left at 8:00 AM tomorrow. Any food poisoning had 18 hours to raise its ugly head. Hopefully I’d be alerted to any impending trouble before then. Because memorable bus ride notwithstanding, I’d like to pass on that whole scenario, please.

For the record: it was indeed a memorable bus ride, but not because of any explosive intestinal problems.

Lunch eaten (can’t do anything about that turkey now!), we continued slowly along the trail, switch-backing up a friendly, gradual grade. A creek rushed below. We topped out on a ridge, still treesy but more open, and followed its spine a bit. By now the afternoon was getting later. It was time to turn back.

We arrived at the Visitor Center at 6 PM. We had spent an entire day here, and had only ventured two miles deep into this enormous park. That’s ridiculous. We had to explore further.

So we drove slowly up the main park road, admiring the snowy peaks and glorious fall color. We stopped at a turnout to admire the view – there’s a pretty little pond down there – and saw, thrillingly, a beaver busily swimming around.

Yeah, we know how to spot animals! We were feeling pretty smug, sitting there at that abandoned turnout, no one else around, watching the beaver. Hah, all those other inexperienced tourists, totally missing the wildlife! People should stick near us if they want to see anything good! We know what we’re doing!

As we stood there, a van roared up. We were generously pointing out the beaver– graciously sharing the sighting with a clearly less-adept park visitor, possibly delivered with a touch of pomposity given our sharp eyes and exceptional outdoor acumen– but the lady wasn’t listening. “Which direction did you come from?” she demanded. “Did you come from up there?” She pointed further up the road.

No, we explained patiently, as if she were a little slow, we haven’t gotten that far because there’s a beaver right here –

“Go!” she interrupted, practically shouting at us, flipping up her camera screen to reveal an enormous grizzly bear. “He’s up there, right by the road!”

It took a moment for the words to register.

Then we were spinning around, bumping into each other, binoculars and cameras swinging wildly as we stampeded to the truck and roared up the hill. I’m not sure we even thanked the lady.

We saw the crowd of people along the road, but the bear was gone. Everyone was standing around, hoping it would reappear. “It was right here!” they told us giddily. So we, too, waited and waited – and eventually we saw a tiny little black dot moving along the slope, high above us – and sure enough, it was the bear, ambling away, barely visible.

We weren’t too disappointed though. We were a little distracted by a huge herd of moose grazing along the roadside, just a few feet away. We can sure spot the wildlife!

Turning back, the beaver was still cutting crisp lines through his tranquil pond. Contentedly, we watched him as the light faded from the sky.

We may not be good at navigating crowded buildings, appraising the safety of lunch meat, or noticing a 600-pound grizzly bear, but we sure know how to enjoy a trail, and we will always, always spot the beaver.