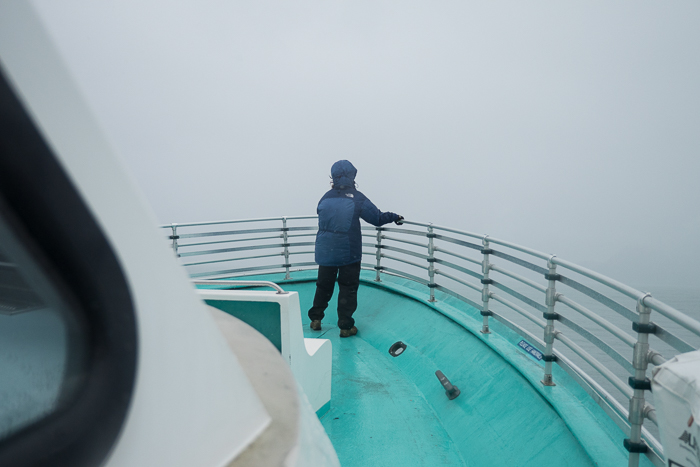 We presented ourselves to the Kenai Fjords Tours office for our 12-hour boat cruise to Northwestern Lagoon (two fjords over from Seward’s Resurrection Bay) for wildlife-ogling and glacier-viewing. Dark clouds loomed overhead. Rain spit from the skies; the forecast promised significantly more. Inanely, the tour operators said: “The weather isn’t good.”

Apparently we had three options. We could: (1) cancel the boat tour for a full refund, (2) put the tour off until a nicer day, or (3) go for it, understanding that the captain might elect to turn back early, in which case we would receive a partial refund.

We loaded onto the boat. Right off the bat, we saw a sea otter rolling in the bay, and a bald eagle sitting majestically in a tree. We cruised along through the calm water in light rain, hugging the left shore of Resurrection Bay. The rain increased… the waves got bigger… and Martin and I found ourselves outside again, right at the tip of the boat, riding those swells.

Who knew I loved it so much? It’s exhilarating to be in the front, getting tossed around! Several people were at the tip of the boat with us, but they retreated once it started raining in earnest. We also went inside and outside, but usually the reverse from everyone else: when the swells really picked up, Martin and I would go to the front and ride ’em. Foot braced against the angled side of the boat and a hand on the railing, I kept my knees bent and rode those waves up and down, one arm up in the air like a rodeo star. Occasionally I got airborne, possibly a little dangerous – don’t want to get flung overboard! – but if my feet were thrown higher than my head, I could always grab the railing with my other hand.

Right? What’s not to love about that?

Unfortunately, at least two of our fellow passengers were not faring so well. I kept glimpsing one woman along the side of the boat, weakly grasping the railing, head hung out over the water. Someone else was huddled inside, wrapped in a blanket, her face sporting a surprisingly greenish hue. Who knew skin could turn that color? I wanted to urge them both to go straight to the bow of the boat, stand right in weather. Watch the ocean swells as they come, look out and see the horizon, feel the brisk air rushing against your face. Aren’t you less likely to be seasick if you’re cold?

Get out there in front!

But of course, I don’t really know what the hell I’m talking about. I’m never on boats, I don’t know what works and what doesn’t. Sheesh, I got totally seasick while snorkeling in warm, calm water in Hawaii! I have no business giving seasick-prevention tips.

We had been hugging the left-hand shore, exploring its coves and inlets, when the captain told us we were going to cross the mouth of the bay. The mouth would feature bigger swells rolling in from the Gulf of Alaska. “Please get to wherever you want to be,” he said over the loudspeaker, “and then stay there for this 15-minute crossing.”

Martin and I looked at each other, then without a word we dashed to the bow. We were the only fools – I mean, people – yeah, probably fools – out there. It was exhilarating: up huge waves, down steep troughs, tossed to the crest, dashed to the deep, flung into the air, mashed against the boat. I whooped it up the entire time, knees bent, arm up, riding the swells.

But crossing the mouth of Resurrection Bay wasn’t the hard part. To get to Northwestern Lagoon, we had to go around Aialik Cape, which notoriously has the roughest seas of the journey. Because the waves were 6-8 feet in the more protected Resurrection Bay (with even bigger waves waiting for us around the cape), the captain decided not to round the point, not to do the full trip out to Northwestern Lagoon. We would stay in Resurrection Bay, return early, and get a partial refund. “The boat would handle the waves fine,” the captain assured us over the loudspeaker, “but we have a number of uncomfortable passengers right now, and comfort is my primary concern. Although the folks in the bow are handling this weather pretty well!” he added. We turned, grinning, to look at him, giving him a couple of big thumbs-up.

I started to suspect these captains might be employing the Andres Technique, named after our enthusiastic naturalist-guide in Costa Rica, who constantly and excitedly urged us to look for some outlandish creature that he was sure he had “just seen,” but was probably never there. I mean, what’s to stop them? Their job is to entertain, to whip up excitement.

So these captains could easily be saying, “Quick, everyone, scan the starboard side! I just saw a rare, all-white grizzly bear!” or “Ohmigosh, did you see that pterodactyl fly into the crack in the cliff over there? They’re not extinct after all!” or “Watch out, port side! A giant squid tentacle just came out of the water, right by the boat!” And everyone, in a frenzy of excitement, searches for something that isn’t there, that never was there, but leaves happy, so excited about almost glimpsing that seriously amazing thing.

As it was, the captain had to resort to “showing” us Moon- and Lion’s Mane jellies. You know it’s a slow wildlife day in Alaska when the main attraction is a jellyfish or two.

Still, the day was a success. We explored Resurrection Bay, rode ocean swells up and down, and came this close to a giant sea squid.