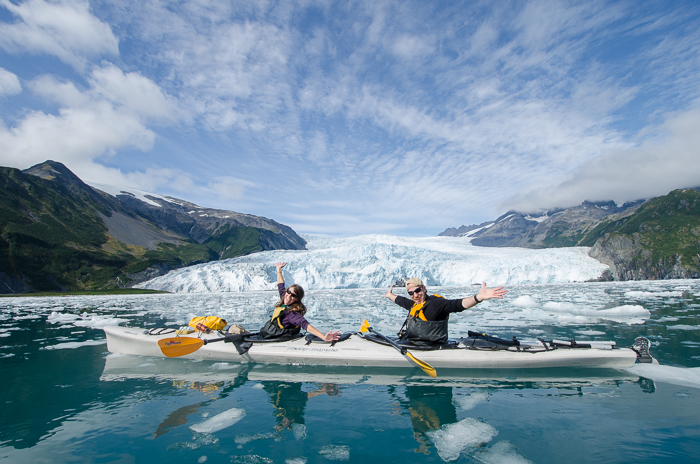 We presented ourselves to Kayak Adventures Worldwide at 7:15 AM. The skies were clear and blue; it was freezing cold. This is summer? We met Nick, our guide, and were told that we were the only people who had signed up for the Aialik (“Eye-AL-ick”) Glacier kayak tour.

A private tour? Works for us!

We boarded a water taxi, captained by a vibrant 30-year-old woman, a 4th– generation Sewardan. “We have life rafts for twenty people,” she quipped to the crowd of way over twenty people. “First come, first served!”

It was a three-hour boat ride out of Resurrection Bay, around the rocky cape, and into Aialik Bay (where we would climb into kayaks and start our paddle to the glacier).

Martin and I spent the entire three-hour trip pressed against the front of the bow, gripping the railing, admiring rocky cliffs and green mountains, and scanning the sea. Looking straight down, we could watch the boat slicing through the water, could feel the waves below. It was cold and windy. Bundled up in my hooded sweatshirt and Gortex jacket (hood cinched tight, wrist cuffs sealed, all battened down!), Gortex pants and gloves, I was toasty warm. Not one other passenger spent the entire time in the front with us. They’d venture out and quickly scurry back into the boat cabin’s warmth. 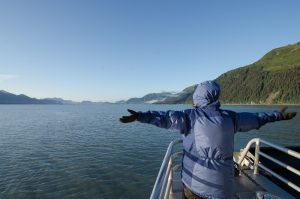 But we were exhilarated. As we left the protected bay and entered the actual Gulf of Alaska, the swells increased and I rode them with pure joy, surfing them up and down, using my knees. The boat soared up to the crest of a wave, then plunged down into its trough – and I would find myself airborne, clinging to that railing for dear life, whoop whoop whoop!– then the boat was tossed up another wave and crashed down the back side again. Over and over and over, those swells kept rolling in.

It was a thrilling, wild ride. I loved it. I kept looking back up at the Captain, and she’d grin at me, giving a thumbs-up.

One time I saw the water boiling off to our left and caught the Captain’s eye, frantically pointing: Over there! Go over there! She initially looked alarmed (“What’s wrong? Man overboard?”) but then Martin turned and interpreted for her, making undulating dolphin-like movements with his arms. Her expression cleared; she grinned and nodded, spinning the wheel.

We turned towards them, and they turned towards us, and suddenly black-and-white Dall’s porpoises were slicing and skimming through the water in front of the boat, swimming torpedo-like underwater, shimmering, streaking along, and then leaping along the bow wave, playing, reveling, guiding us forward, boat and porpoises racing along together.

I leaned over the bow, watching those glorious mammals sparkling in the sun like living diamonds. I could have stood there all day watching them.

Nick came out into the wind every now and then to check on us or offer us muffins or fruit. We were always busy watching (whatever), and would distractedly wave him away. We’re good, thanks!

After a sensational morning of blue water, green mountains, rocky outcroppings, wildlife, exhilarating ocean swells, and bracing wind, we entered Aialik Bay. I noticed some clear, crumpled-up, plastic-looking things bobbing in the water. Indignantly, I wondered who would have thrown water bottles into this pristine bay. Were kayaking and boating companies that unbelievably irresponsible, to let their clients toss trash overboard? Or did ocean currents push bottles from far and wide, into this one cove?

And then I realized with a thrill that no, those clear things bobbing in the water weren’t discarded water bottles.

They were ice chunks from the glacier. Little icebergs.

Nick, Martin and I were dropped off at a lonely rocky beach; the water taxi chugged out of the bay, leaving us alone seemingly in the middle of nowhere. We dragged kayaks out from under tarps, hauled them to the water’s edge, suited up, adjusted our seats—and off we went, Martin and me in a double kayak, our guide Nick in a single.

It was, of course, fantastic. 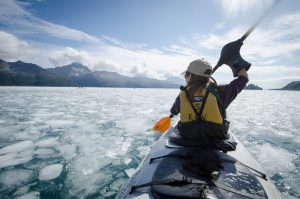 We could see Aialik Glacier, a huge wall of ice, at the end of the bay. We kayaked towards it through calm waters and amazing scenery, and those bobbing icebergs got bigger and bigger. Every now and then we heard a rumbling roar, and a big icy slab of glacier would come sloughing off, crashing into the water at the end of the bay. We were far enough away that we didn’t even get any ripples from it. The ice chunks around us grew bigger and more numerous, and we had to start actively avoiding them. Sitting in the front of the kayak, I would holler to Martin, “Left! Go left, Martin! Ack, I mean RIGHT!!” Soon we had to go single-file, Martin and I following Nick’s path as he threaded his way through slushy ice water. Eventually he had to cut a path of water for us by shimmying his kayak through the ice, forcing the ice floes apart.

I saw a furry little face peeking up at us from behind a mini-iceberg—sea otter!—and a little sausage hauled up on an ice floe—harbor seal!!—and then another whiskered face poking its head out of the water to look at us—another harbor seal!!—and I could have stayed right there, all day, watching them.

But noooo, we were all heading towards that big lifeless wall of blue ice over there.

Aialik Glacier grew and grew; we stopped about half a mile away, a safe distance to avoid being swamped by swells as the glacier calved. Floating there in our kayaks, Nick asked brightly, “Who’s hungry?” and pulled soggy sandwiches out of his bag.

I must confess to feeling a stab of disappointment.

I knew lunch would be provided. Somehow I had envisioned kayaking over to a secluded green cove, beaching the kayaks, getting out and stretching our legs, and then wandering among long tables with white tablecloths, laden with steaming tureens of soup, piles of fresh bread, warming pans with a choice of roast beef or fresh salmon, bowls of fresh salad, an assortment of both hot and cold beverages, and maybe some airy mousse for dessert, or at least a platter of big fat chocolate chip cookies.

But no. Just like that— poof!— the fantasy evaporated. I was being handed a squashy roast beef sandwich wrapped in wet paper. It was an unappetizing bundle. I took a tentative, unenthusiastic bite, and discovered that kayaking makes you hungry. It went down just fine.

Nick then asked, “Dessert, anyone?” and I turned to him with anticipation. Maybe I would get that big fat chocolate chip cookie after all!

But he was offering us Nature Valley granola bars, the very ones we buy at home. The very ones I get sick of eating.

Arranging my face into what I hoped was an appreciative (rather than forced) smile, I accepted the granola bar. And ate it.

Even if lunch wasn’t quite what I’d envisioned, the company – not to mention the view! – was outstanding.

In due time we started back through the ice field. The ice chunks got smaller and further apart, the kayaking got easier, and I got more tired. My arms started to ache, my butt was sore, my legs felt cramped. I was ready for the day to end. Nick was leading us around a small island, and as we kayaked along its pretty shore, I started to despair that we’d ever get all the way around it and back to the rocky beach again. But suddenly we turned at the island’s tip, back into the bay, and were dragging our kayaks to their tarps.

Magically, right on cue, our water taxi reappeared and collected us.

Did I stagger onto the boat and fall prone to the floor? Did I hobble inside and collapse onto a cushioned seat, arms and legs flung out at bizarre angles? Did I sit, dazed, in a corner, or gibber crazily to myself, or beg surprised strangers to please please please massage my aching shoulders, aching back, and aching butt?

All were equally attractive options, although I’m not sure how strangers would have reacted to my plea for a butt massage.

No, I marched to the front of the boat and took up my appointed place in the bow, and rode those swells, and felt the wind, and whooped and hollered the whole three hours back. The captain continued her wildlife tour for us, taking us past a large rock draped with Steller sea lions; she veered off-course to chase down a water spout, so we could all glimpse the broad back and huge tail of a humpback whale (and I oohed and ahhed, like I always do when I see whales); we slowed to watch a mother sea otter with her furry pup snuggling on her belly; we stared entranced as another sea otter enthusiastically tore up an octopus, feeding.

The sea otter and octopus were right in the boat harbor. You don’t have to go far to see wildlife in Alaska.

Let’s do a tally of today, shall we?

Brilliant blue skies. Breathtaking wildlife—sea otters, harbor seals, sea lions, porpoises, jellies, puffins, whales. Unparalleled beauty— shimmering water, rocky islands, green coves, all gloriously unspoiled. Kayaking through an ice-filled bay to the edge of a phenomenal blue glacier. Hanging onto boat railings as the craft pitched through giant swells, propelling me up and down while I whooped with pure joy.

Truly, a day can’t get any better than that.

Unless, of course, you throw in a butt massage.