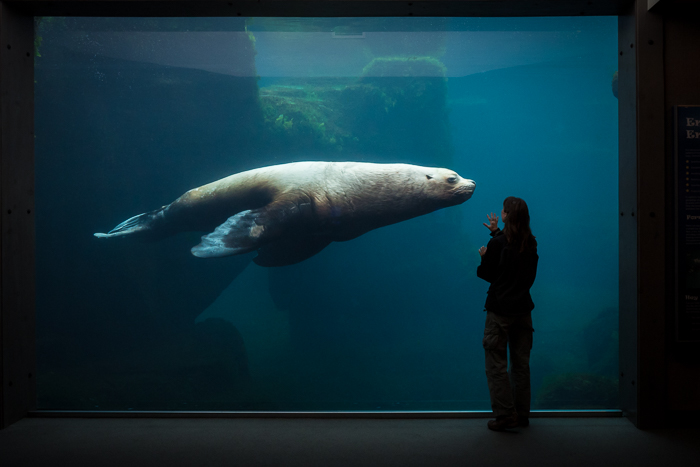 It rained hard all night, and was still raining as darkness brightened to gray. We propped ourselves up in bed with comfy pillows and, through the huge windows, watched a sea otter swim slowly by. It dove and rolled in the bay, feeding and grooming as rain poured from the sky.

Because it was forecast to rain all day, we decided on an indoor activity, and duly presented ourselves to the Alaska SeaLife Center. It is an enchanting aquarium full of informational exhibits and videos, glass tanks with all kinds of fish, crabs, and jellies, plus several large animal enclosures. Each exhibit so enthralled me that I could barely tear myself away – but then the next exhibit would enthrall me, too.

First stop was the aviary. I knew it’d be a cool place when I read the sign at the door: Please do not touch the birds.

Are you kidding me? Don’t touch the birds? They need a sign stating that? Is there even a possibility of touching them? Surely they couldn’t be that close, that accessible.

Yes they could, and yes they were.

We stepped inside the enclosure and were immediately greeted by a horned puffin hanging out on a rock, right there at eye level. Like, I could have kissed him if I’d wanted to. 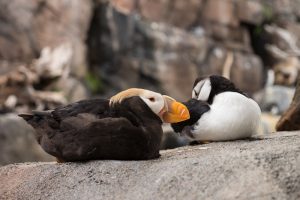 Puffins, ready to be kissed

Well, of course I wanted to, but I was trying to obey the sign. Although, I must point out, the sign didn’t say anything about not kissing the birds, so maybe I missed a big opportunity there.

We stood admiring the horned puffins and tufted puffins. Some were black, others white. How do you remember which is which?

There ya go, and you’re welcome.

The enclosure also contained murres. The puffins and murres would dart underwater and swim, using their wings as flippers. Unlike the others, one puffin was very splashy and ungainly. He reminded me of a story that our boater friend Ernie tells. Ernie taught himself to roll a canoe upright. Most boaters learn a roll technique that allows them to seemingly-effortlessly bloop back up onto the surface with barely a splash. But Ernie was self-taught. He’s proud of doing things his own way. So Ernie’s roll (according to Ernie) entails lots of thrashing, splashing, flailing around, and general beating at the water, resulting in waves and froth. He’d get himself righted, every time, but meanwhile the eyes of other boaters were bugging out in astonishment.

I suspect the puffin’s friends felt like that as they watched him making a commotion in the water. “Oh no, there he goes again!” they all think as they scurry away to the other side of the tank. “Why does he do that? It’s so embarrassing!”

The tank was two-stories high. I wanted to go downstairs to watch the birds underwater, but there were two other tanks on this upper floor, so (before going downstairs), I thought I’d check them. One tank housed Woody the Steller sea lion, and the other housed three sausage-like harbor seals. It sent me into a mild panic, wanting see it all right now – and I got dragged off-task, forgetting all about the birds.

Woody is a massive 2100-pound Steller sea lion, an old man in sea lion years but apparently still obsessed with the ladies. He swam around and around his large rocky enclosure, often diving deep into the tank, out of sight from above. That’s it, I needed to go below! I dragged Martin away. He was protesting something about “going in order,” and “missing other top-level stuff” and “Wait” and “Hey come back,” but by then I was down the stairs.

I somehow found myself before the harbor seal tank, and sat for a long time watching them glide past, so supple and fluid, one languid little flipper-swish propelling their torpedo-like bodies forward. At the surface of the water, they often rolled over, swimming along upside down. I stared, fascinated. Being upside down certainly didn’t impair their perspective or depth-perception, because they’d glide to the glass wall (or a rock, or another seal) and then, just as I was bracing for a collision, they would casually and unerringly turn and sweep alongside it, never once crashing into anything, or bumping a flipper, or knocking their head, or grazing a tail, or looking like they were taking startled evasive action. 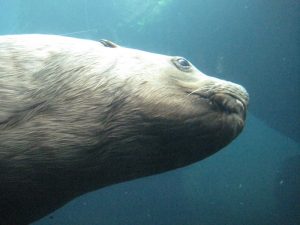 I moved to the next tank, and spent more time with Woody. Every time he dove, he sailed gracefully past the glass right in front of me, swooping effortlessly along, eyeing me with his creepy bulging eyes. I think I love him. Around and around he went, and he thrilled me, every time. He does have a way with the ladies! Martin eventually had to grab me by the arm and physically drag me away.

He was probably feeling jealous.

I was disgruntled at being separated from my new love interest until I turned to see the murres and puffins swimming swiftly underwater. With a thrill, I forgot all about Woody (sorry, Woody!) and fell in love with the birds all over again.

I also had a nice flirtation with a big orange fish. Martin was busy watching the puffins when the fish and I spied each other. He was pumping his head while opening and closing his mouth. I was rivetted, and started moving my head and mouth in unison with his head and mouth. Up and down, back and forth, we stared at each other through the glass, dancing together, eyeball to eyeball, mesmerized– head bob, mouth open, head duck, mouth closed– until I felt a sudden jab in the ribs, and the spell was broken.

“What are you doing?” Martin hissed. “Don’t do that in public!”

Oh! No? I turned back to the orange fish, but he was already swimming away. I hope our break-up didn’t devastate him.

Soon after, we found ourselves at the SeaLife Center’s equivalent of a petting zoo. Shallow tanks filled with icy cold water displayed various sea stars, anemones, urchins, and sea slugs. Animals were sharp, spiny, soft, squishy, sticky, goopy – and I had to poke every single one.

At one point, I urged a 10-year-old girl next to me to touch the squishy sea slug.

“Nooooo!” she said squeamishly with a huge smile, shrinking away.

“Nooooo!” she repeated, beaming, retreating behind her mother but clearly intrigued by the weird lady prodding the squelchy thing. I hope she poked it after I’d gone. It’s very satisfying. 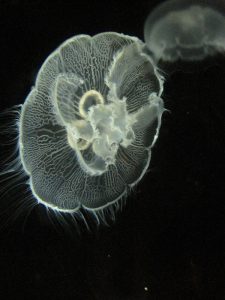 We were headed for the sea otters; the SeaLife Center rehabilitates injured or orphaned sea otters, then releases them back into the wild. But on the way, we discovered the jelly tank where I was transfixed by the delicate, luminescent creatures. I wanted to bob and dance with them, too, just like I did with the orange fish, but Martin took me firmly by the arm and led me away.

Which was fine, because the moment I saw the three silky, soft sea otters frolicking in the pool, I instantly fell in love. Hard. Permanently. They were bewhiskered perfection. I wanted to gather those animals into my arms and kiss them, but no amount of beating on their glass enclosure got me inside. Their trainer was tossing squid to them which they ate with gusto, rolling and twisting in the water, using their dexterous hands and showing their sharp teeth. They have a bunch of skin under their armpits which they use as a pocket – they shove extra food in there, then (when they’re ready for it) roll over, snatch it out of their pocket, and gobble it up.

We asked lots of happy exuberant questions until our guide, slightly pop-eyed, told us to stop, and politely asked us to leave. The Center was closing. We had been there all day.

It was still pouring rain when we arrived back home. But any day in which you fall utterly, completely, and permanently in love (several times over!) is a really good day.