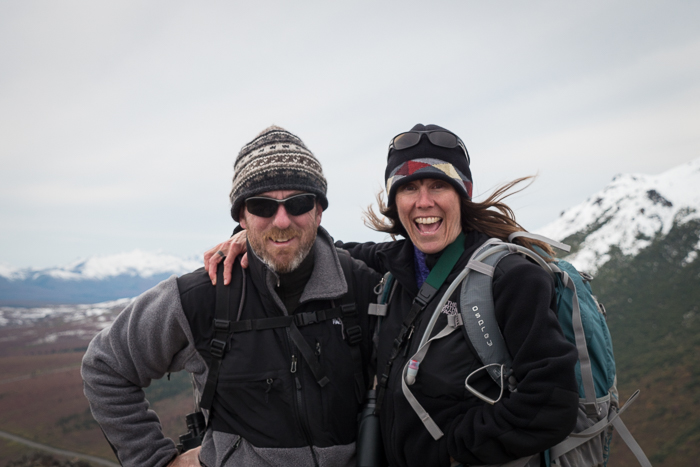 The trail went up and up. Patches of snow appeared and grew. Soon snow covered the trail and we tromped right over it. Huh, didn’t expect this! After a time, it became clear we were off the true trail, and were just following footsteps through the snow made by previous hikers. The footsteps led the right direction, though, up towards a rocky outcropping that we guessed was the saddle, the top of the ridge where we would start down the other side.

Footprints started breaking off from the “trail” as people decided to make their own way to the saddle. Eventually we left it too, clambering up the hillside through the snow to get to the rocky crest.

It was bitterly cold with an icy wind whipping over the rocks. Amazing and beautiful, yes, like being on top of the world – but unbelievably cold. This was surely what it was like to stand on top of Mt Everest. (With sincere apologies to anyone who has ever actually climbed Mt Everest.) I tried to take some pictures, but my fingers were frozen, red and stiff, barely able to function. Martin wanted photos of me walking back and forth along the ridge, like I was enjoying a nice little stroll.

But I did it. That’s called true love.

I was relieved when it was time to start down the other side, but a little worried, too. There was no trail to follow, just some lone tracks through the snow, leading down and away, surely off the trail but seemingly in the right direction. We couldn’t see our destination, the Savage River parking lot, from here. Apparently we had to cross another ridge. Did the person who made these tracks know where they were going? Were they going where we’re going?

But we didn’t want to go back the way we came. We felt confident that if we went down, we’d eventually get out of the snow and locate the actual trail, which we could then follow. One thing was for sure: the parking lot wasn’t up here. So we just blundered our way down through the snow.

As we descended, the snow began to thin out. Bits of rock and low-growing plants started peeking up through the snow; the snow patches became smaller, the rock and scrub patches grew larger. We started getting glimpses of the trail far below. We finally stumbled out of the snow and onto the dirt path. It led us along an exposed ridge to another outcropping with large rocky spires. And finally, we could see the Savage River parking lot, looking very small, way down there.

There were more people on this side, people who had clearly hiked up from the more-popular Savage River trailhead. We had planned on catching the 3:30 PM shuttle back, but were late, as usual. At this point, we would be lucky to get down in time to catch the 5:30 PM bus. There was always the 7:30 one!

A young couple with a baby approached; they were wearing canvas tennis shoes and light summer jackets. “Can we make it over that ridge?” they asked brightly.

We eyed their thin shoes, lightweight jackets and lack of hats or gloves. We considered the gurgling baby strapped to their chest. We noted the time.

“No way,” we said with conviction.

We strolled along the trail, letting people pass as they hurried down to catch the 5:30 bus. We took our time, exploring the trail, stopping frequently. 7:30 crept closer. It was time to make our way to the shuttle stop.

And so down, down, down, one rock stair at a time. The air warmed from freezing to cool. Colorful leaves reappeared on shrubs and trees; now and then a leaf would let go and flutter softly to the ground. We had left winter and the top of the world behind, and hiked back down into autumn.

This is one wonderful and crazy summer vacation.