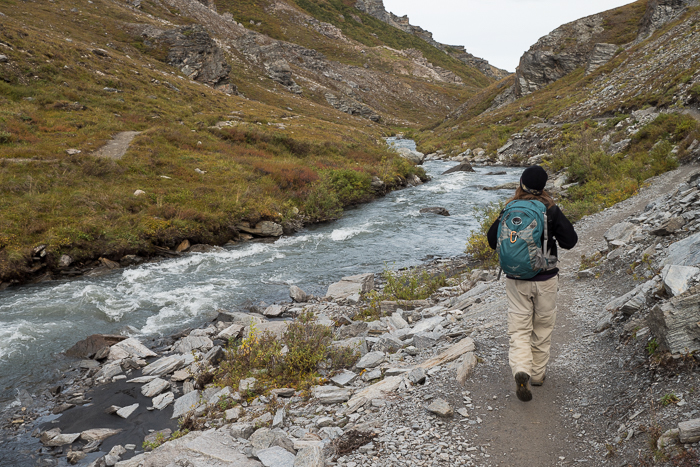 As we started our last hike in Denali National Park, I found myself aggravated by a lady who was singing somewhere. I couldn’t see her but I – along with everyone else within a two hundred mile radius – certainly heard her. She was warbling – actually, more like yodeling – at the top of her lungs, shattering the silence, drowning out the sounds of the river or birds or anything else.

Seriously, lady, shut up! We don’t want to hear you! A man was sitting quietly on a park bench looking at the river; as we passed, we rolled our eyes at each other, shaking our heads in disbelief. It was so selfish of her, screeching in the wilderness like we all wanted to hear her. Go sing in the shower! Keep your mouth shut here!

I scowled as I tromped along, glaring around, wondering where she was, hoping to run into her. I imagined what I’d say to her if I found her: “Lady, the worst part of my hike here today was having to listen to you.”

Or maybe: “Hey lady, guess what? Nobody wants to hear your noise!”

Martin was a little nervous, and glanced around for her too. What if we actually encountered her? Would I be rude, make a scene?

It seemed likely I would.

But her voice was receding, we were moving away from her. Maybe her voice didn’t carry two hundred miles after all. So I tempered my words, and instead, if I were to run into her, settled on saying, “This is such a beautiful place, it makes you want to burst into song! But nothing beats the peace and quiet, don’t you think?”

Luckily, we never saw her; her voice faded and disappeared. The music of the park re-emerged: the burbling river, the chirping birds, the rustling wind. My good mood returned. Had we met her at the end of our hike, I would have probably just smiled and said hello.

We wandered downriver, taking way too long. We kept saying, “Okay, no more stopping unless a big animal is blocking our path!” – and then seconds later, we’d stop. We’d have to, to marvel at the fall colors, or take a picture of the view (which probably looked remarkably like the picture we took two steps ago), or breathe the air, or just be here and relish the moment.

So by the time I spotted the Dall sheep on the hillside, we were already late.

Oh well! Screw the schedule. We photographed and admired the pure white sheep with their renowned curly horns. They grazed contentedly high above us, nimbly picking their way across the rocky slope. We pointed out the sheep to other hikers; those hikers stopped, appreciated them, and in due time left. We stayed rooted to the spot.

Dragging ourselves away, we clomped across the small wooden bridge and started back upriver towards the parking lot, vowing not to stop for anything else, not anything!

But of course, there were a few stops. There had to be, for must-see fall colors (the fall colors were so different from this side of the river!), and river views (it was like a whole new vista!) and a squirrel (you seriously can’t expect us to just walk past a squirrel, can you?). But mostly we stayed on-task. We were over two hours late when we made it back to our red Nissan Rogue.

I climbed into the passenger seat, shrugging my daypack into the rear seat and settling in for the long drive back. Martin opened the hatchback to store camera gear amongst our luggage. After a moment, he closed the back (somewhat abruptly, it seemed to me), then yanked open the driver’s side door. Poking his head in, he hissed, “Carol! Wrong truck!” and disappeared, slamming the door shut.

I sat there stupidly, blinking a little.

What do you mean, wrong truck?

And then I glanced around. Wait a minute – where’s the water bottle that’s usually sitting between us? Where’s the Alaska guide book that I always leave in the door? And what’s that, a strange chain dangling from the rearview mirror –

I hastily snatched my daypack and scrambled out of someone else’s vehicle.

It started to drizzle as we drove back to Anchorage, lightly at first, then strengthening to a downpour. It was a fitting bookend to our Alaska summer vacation, one filled with pelting rain, heavy snow, freezing temperatures, tepid sunshine, and lots and lots of joy.