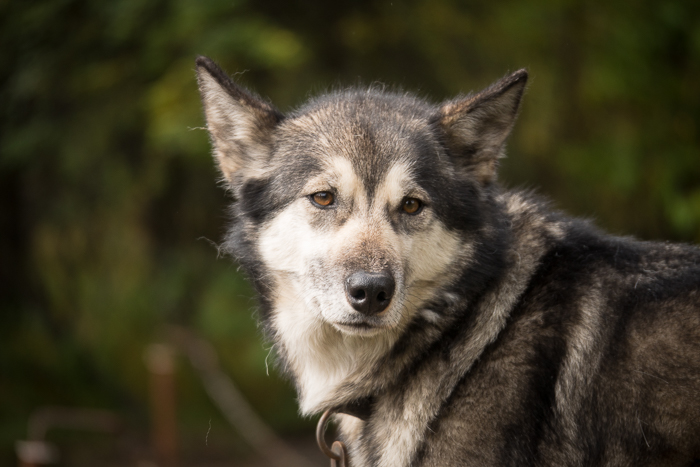 Entering the Denali kennels, we saw that each dog had a pretty log cabin with their name prominently displayed. I immediately fell in love with the gorgeous Alaskan huskies. These dogs, I have to say, looked better than the Seavey ones. For one thing, they weren’t so skinny. Granted, these dogs
weren’t racers or marathon runners. They’re patrol dogs, pulling sleds in winter to check on campsites or deliver supplies or… whatever, patrol. They were fluffier, heftier. And (we found out), each dog was walked every day! So they’re not just chained to their kennel or pulling a sled. We saw dogs all the time out on the road, happy dogs trotting along, sniffing stuff, walking with their people.

I went around to every dog before the presentation and said hello, hey there, come say hi. Some dogs were sleeping in their kennels and not inclined to visit, which made me a little indignant. Hello, it’s me! I’m right here! I called them by name and told them, in no uncertain terms, to get out here right now and say hi – and mostly, they did. They came out, streeeeetched, and trotted over, sniffing my hand, maybe giving it a little lick.

I could barely reach some of them (I might have had to edge into their enclosures just a bit, shhhh, don’t tell anyone) but I got to them all.

One dog, tied right out in the open, stood patiently, surrounded by people. An older woman was cautiously patting his head.

Ohmigosh, let me show you how it’s done!

I waded in there (possibly elbowing the older lady aside) and started with a couple of pats on the rump, quickly intensifying to a big ole vigorous butt scratch. I imagined the dog’s eyes lighting up: This lady knows what she’s doing! Moving forward, I imparted a robust whole-body massage, dragging my fingers energetically through his fur, up and down, back and forth, flank, belly, haunches. The dog is feeling it now! I followed with a spirited rubdown around neck and ruff, eventually getting his ears flopping wildly back and forth, his entire head rocking side to side. I finished with some big ole bear hugs and sloppy wet kisses. He was happily riled up and prancing around as I turned to go; the crowd stared, open-mouthed.

Yeah baby, I don’t know much, but I know how to pet a dog.

Or rile him up, anyway. It’s my specialty.

It was time for the demonstration to begin. Ranger Dan called us over to the open bleachers and tried to put on a little show with dog-related history, poetry, and trivia. But his microphone wasn’t working properly. And… I don’t know… he seemed pompous, strutting around in front of us, reciting his stupid poetry (who wants to hear poetry anyway? – says me, the poet!), and telling his stories with drama and theatrics. He was either oblivious or indifferent to the fact that we could barely hear him. I got annoyed. I’m sorry, Ranger Dan, I know you think you’re awesome, but I came here for the dogs, not you. Stand aside!

Finally he said, “Are you ready to see the dogs?” and everyone roared, “Yes!” The dogs – just like the Seaveys ones – knew it was their turn, and started barking, whining and whirly-gigging.

They all wanted to pull a sled. PICK ME, they howled.

Five lucky dogs were selected and harnessed in. The musher climbed aboard and then they were off, racing around the short track. We didn’t get to be pulled ourselves, like at the Seaveys’, but it was wonderful to watch the dogs displaying speed, power and teamwork while emanating great joy. The circle complete, they lay down in front of us and were rewarded with a bone.

They were the picture of contentment.

Do what brings you joy, give it your all, and then have a well-deserved rest. Words to live by, brought to you by the magnificent sled dogs of Denali.