Martin and I were standing in the middle of the cavernous, empty San Francisco International Airport terminal, the only people in the vast room, our bags piled around us. It was very early in the morning.

We watched Dakota, Martin’s best friend and our traveling companion to Costa Rica, stumble into the terminal, head down, concentrating on his phone. We waited in the echoing space, grinning at him, waiting to be seen. Dakota sank onto a bench facing us. Martin’s cell phone pinged that a text message had arrived.

So are we, moron, was Martin’s reply.

His inability to notice the two of us standing conspicuously in the middle of an empty room bodes very, very well for Martin.

Martin and Dakota are fierce competitors when it comes to birds. They both keep detailed bird lists of exactly how many unique birds they’ve seen, along with where, when, and with whom. Dakota was currently ahead of Martin. But locating small flitting birds in a tangled Costa Rican jungle is way more difficult than locating two human-sized animals waving wildly at you from the middle of an empty room.

Our birding agenda included three Holy Grail must-see birds: a Toucan (either the Chestnut-mandibled or Keel-billed), the rare and endangered Green Macaw, and the incomparable Resplendent Quetzal.

In Liberia, Costa Rica, we stayed in an unassuming hotel a block off the main square. The lobby was lovely, a large open-air room with tile floors and high fans and inviting tables. There was no wall separating the lobby from the central outdoor courtyard : A few steps led to a grassy enclosure with colorful flowers. The staff was friendly and accommodating. The food was fantastic.

Our rooms were in the very front of the hotel, facing the street. They consisted of a bare concrete floor, no hot water (a cold shower wakes you up much more efficiently than a hot one), drains that all seemed to go to the same pipe (flushing the toilet causes an ominous gurgling in the shower), and the faint but pervasive smell of sewage.

Martin and I lay awake in bed that night under the roaring fan. Unable to sleep in the tropical heat, we listened to rumbling traffic and loud conversations as people walked past our window, and some sort of chain-link fence being rolled up or pushed back, and the hotel’s dot-matrix printer singing along. We thought enviously of Dakota in the next room, who had happily announced that he would be taking a Benadryl, putting in ear plugs, and sleeping like a baby.

This would be the first night, but certainly not the last, that Dakota would sleep better than would we.

But that’s okay! We’re in Costa Rica! We are poised on the brink of a much-anticipated two-week adventure. We would be exploring the hot dry Pacific coast, cloud forests high in the mountains, tropical rainforests on the slopes of volcanoes, and the steamy jungly Caribbean lowlands.

Somewhere out there, a Toucan, a Macaw and a Quetzal were surely waiting for us to happen by. And there would be other tropical birds, plus monkeys, coatis, crocodiles, frogs, bugs, and undoubtedly much, much more. 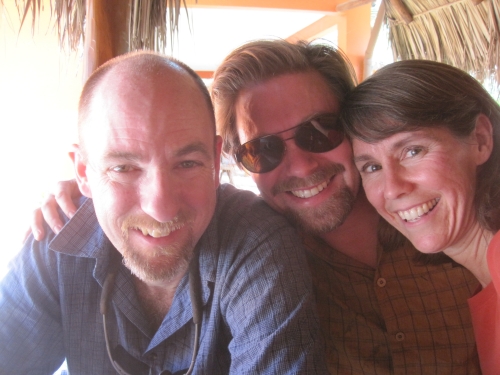 Martin, Dakota, and me