To read my Costa Rica journal from the beginning, click here.

We were sitting in rocking chairs on the front porch of our rental house in El Castillo, deep within Costa Rica’s tropical rain forest. It was early morning, and the porch faced Arenal, the iconic cone-shaped volcano which towered over the smooth glassy lake before us. Coffee cups in one hand, binoculars in the other, we scanned the lush foliage for Toucans, one of our elusive must-see birds. It was here, in Arenal, that Toucans lived. It was here that we’d have our best chance of seeing them. 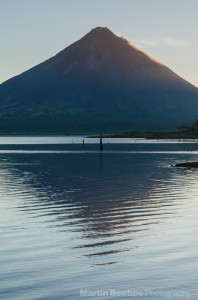 View, across the road from our rental house in El Castillo: Arenal Volcano

No Toucans so far, but then we’d only just arrived. We’d tumbled in the night before, tired from our long drive from Monteverde up in the mountains, to discover a kitchen full of tiny black ants, pots and pans covered with thick furry mold which no amount of scrubbing could entirely remove, an empty propane tank, and a dry swimming pool.

Oh, and a flat tire on our car.

Did I mention that Martin booked every lodging down a long stretch of tire-popping dirt roads? Yeah, we jounced over 9 km of rut and rock to get here.

I’m not sure, but I doubt that AAA services are available in El Castillo, Costa Rica. How would we get a flat tire fixed, out here in the boonies?

So I walked back to the main rental office for help, racking my brains as to how to say “flat tire” in Spanish. I had no idea. So I said, “Car,” and pretended to drive, and then “wheel” (and held out my arms in the pleasing image of a nice round circle), and then made a whistling deflating sound, accompanied by a flattening gesture of my hands and a very, very sad face.

They got it immediately.

Their friendliness, and eagerness to help, and assurances that they’d hurry over and fix it for us was such a relief after my long day that I burst into tears, to their utter alarm. They surrounded me anxiously, patting my shoulder and releasing a veritable flood of words in Spanish.

I couldn’t follow the words, but I certainly got what they were saying.

The next morning we were refreshed, sitting happily in those rocking chairs scanning for Toucans and looking across the lake at the magnificent, steaming volcano. The foliage in front of us offered up a thrilling new host of bird life, including the dramatic oropendola (affectionately known as the oropharynx to me), with their striking candy-corn bill and bright yellow tail.

Eventually we dragged ourselves away from the alluring rocking chairs for a trip to the Arenal Hanging Bridges. The tire was repaired. Time to explore the area! 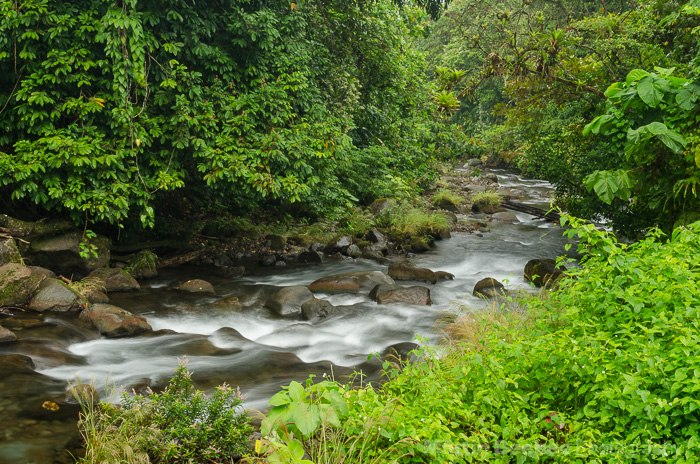 The Danta River, near our rental house in El Castillo, Costa Rica. Can you say “paradise”?

Let’s see: Five hanging bridges suspended up in the trees… 2.5 miles of stunningly gorgeous, lush green trail… calm and cloudy weather (perfect for photographs)… 1:00 PM… Yeah, we were going to run out of time. 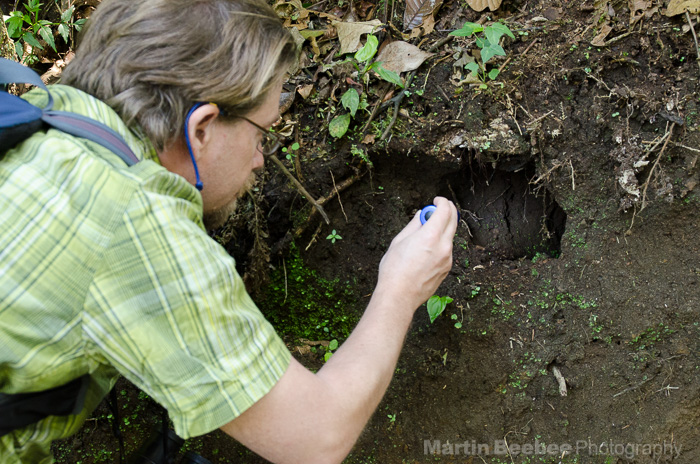 Dakota looks for spiders and snakes and fanged creatures. Do you think he’d jump if I said “Boo!”??

I stopped every few feet to scan the canopy for monkeys and sloths and tropical birds. Might today be the day we see a Toucan? We made deliciously slow forward progress. Each hanging bridge was a delight, swaying dizzyingly along its long span above and among the trees. 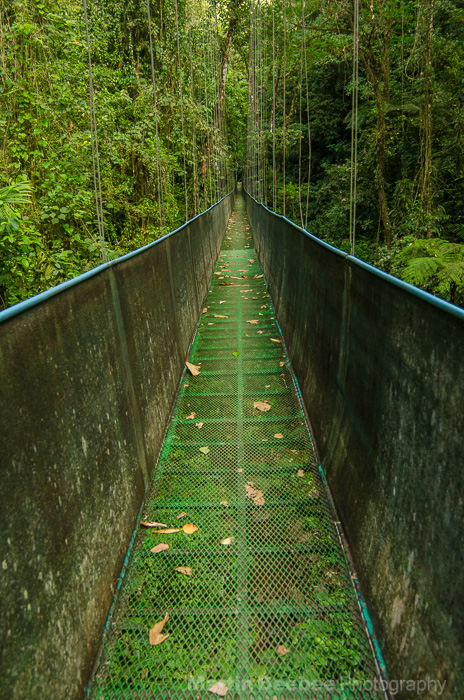 A hanging bridge in the midst of the rainforest, Arenal

After sitting on shady wood steps in the trail and eating lunch, Martin took some video footage of our feet walking along the leafy path. Dakota and I embellished the footage at the end (destined for a blooper reel or the cutting room floor), doing a little jig dance for the camera and giggling madly. If you listen carefully, you might catch Martin’s forehead slap. “Oh, you clowns!” he sighs as the camera is flicked off.

It’s hard for a serious director to find good help these days.

We wandered along the verdant trails and over the magnificent bridges, wrapped in happy satisfaction, but started to feel the inevitable push for time. We were halfway through our available hiking time (read: daylight hours), but nowhere near halfway through the 2.5 miles of trail.

The trail led us down to the aptly-named Enchanted Waterfall. Lack of time notwithstanding, we all threw off backpacks, took out various cameras, and explored the cascading waterfall and its cool pool, with a chattering stream bordered by colorful plants. We could have spent all day, right there.

Onward to a second waterfall, Hidden Waterfall, where we were tempted to spend time as well, but now we were definitely feeling pressure to make forward progress, cover ground, and exit the rain forest before night actually fell. Dakota was starting to make his “I’m gonna freak out if we’re here after dark” noises, muttering about giant insects, poisonous snakes, thousands of silent watchful glittering eyes, and the jungle slowly closing in around him. Truly, it’s very entertaining.

The guy is a fearless and accomplished outdoorsman. He has backpacked for years through rugged and remote wilderness, cooking out in the open, sleeping under the stars, spending days at a time in wild bear country. Fearlessly, despite being unprotected and exposed.

He has eschewed established trails, expertly navigating cross-country over isolated and rocky terrain to discover pristine lakes and green valleys. And each time, he has successfully navigated his way back again, never unsure about direction, never questioning his whereabouts.

He has scaled high mountains, climbing up to their windy and barren peaks to stand upon the pinnacle, surveying the world far below.

He has traveled the world. He doesn’t even need a map. Ever.

And yet, inexplicably, incongruously, here he is. Afraid of the dark.

The only thing that Dakota really seems to be afraid of is his own wildly-overactive imagination.

So we hurried along, past glorious scenery without stopping to enjoy it, eventually climbing up a long, grueling, never-ending staircase. Hot and gasping, we staggered to the top and out of the park as night fell.

At home, we discovered the swimming pool had been filled to the brim, to the point of overflowing. It was like our own personal infinity pool. We were hot and sticky after the hard slog out of Hanging Bridges, so I dove into the cool glassy water. Instantly revived, I became silly.

“Look, I’m a Quetzal!” I cried, diving underwater and waving my two legs in the air, imitating the Quetzal’s elegantly long, double-feathered tail.

“Look, I’m a magpie jay!” I crowed, flopping one hand over my head, imitating the jay’s distinctive dingle-bob appendage.

“Look, I’m an oropendola!” I screeched, stretching my two arms straight out in front of me, imitating its massive candy-corn bill.

And I dove down, out of sight, hiding from view.

Despite constant searching, right here in its habitat, the Toucan still eluded us.

For dinner, we ate another damn burrito, this time made with beans and cheese, cooked in the kitchen’s mold-stained frying pan, fighting for counter space with the inexorable waves of tiny black ants.

I really could have done without the burrito, though.