To read my Costa Rica journal from the beginning, click here.

Martin, Dakota and I waved cheerfully at our host, Marco, as he drove away, leaving us alone in the remote Costa Rican jungle.

He had driven us an hour up isolated dirt roads, bumped down tiny dirt tracks, and dumped us off on the muddy banks of this small river. It would be up to us to find our way back to the ecolodge, kayaking down this, the Cas Del Mar River, into the Tres Amigos River, and then onward to the great San Carlos. From there, we hoped to spot the take-out site for our ecolodge, buried in the dense jungle.

If we missed it, we would end up at the Nicaraguan border. 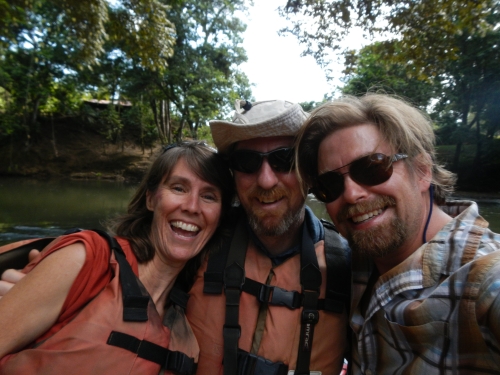 We readied our kayaks at the launch site, donning life vests, securing backpacks. Dakota hopped into his single kayak and paddled expertly upstream, getting a feel for the river. Martin and I confidently entered the water in our double kayak, intending to follow Dakota upstream a bit, but instead we were swept downstream towards a tiny rock, barely jutting up out of the water. The small river was swifter than expected.

Unbelievably, I thought we were going to hit the rock broadside and capsize, not ten seconds after launching. On a riffle! In shin-high water! Water onto which you could safely set a baby in an inner tube to float gently downstream!

Truly, anyone who capsized on a riffle that size had no business being in a kayak at all.

Thankfully, we took immediate evasive action and managed to avoid the rock (not to mention a disgraceful capsizing and a lifetime of teasing from Dakota).

And so began an utterly perfect day in the kayaks, a day that Dakota would later rate as “one of the best ten days” of his life.

Yeah, baby. It was that good.

I spotted a monkey almost immediately up in the trees, and we beached the kayaks to stare up at his furry little face. Dakota thought maybe he saw an owl, and waded out into the river for a better view. He ended up floating lazily downstream for the sheer fun of it, which turned his supposedly waterproof binoculars into a monocular, with one lens hopelessly clouded. Martin found some industriously-working ants and spent time photographing them. We scattered over the beach, enjoying ourselves, not 100 feet from our launching site.

Once again, we were making deliciously-slow progress.

We continued down the narrow river, dense jungle crowding us on either side. We encountered small rapids and riffles from underwater rocks or downed trees – snags to be avoided, quick decisions to be made (Go right? Go left? Go in-between? Quick, which?).

We followed a Sun Bittern as it flew downstream before us, showing off its dramatic wings. We saw Frisbee-sized turtles, sunning themselves on warm logs. We watched great green iguanas with bright orange spikes along their spines racing swiftly down tree branches and splashing loudly into the water. Fish jumped. Birds sang. We glided placidly into the Tres Amigos River.

We would paddle occasionally, enjoying the gentle splash of the oars in the river, the soft drips of water from the paddles. We floated a while. Actually, Dakota spent a good part of the day just drifting, lazily stretched out in the kayak, feet up, leaning against his backpack, letting the kayak take him wherever it wanted (as long as it was downstream), often broad-side or even backwards to the current. 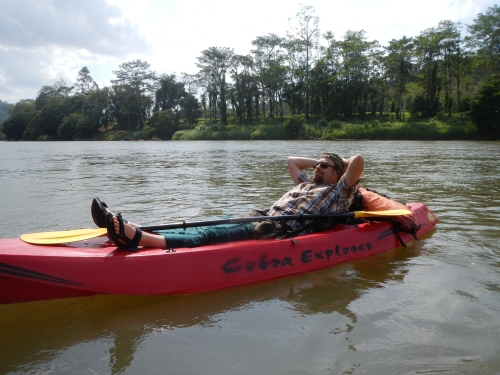 Martin and I would glance over, and Dakota would be missing from his kayak entirely; we would find him floating in the river next to his kayak, splashing, frolicking, rejoicing.

We found a friendly little beach around noon and ate a few paltry nuts and a granola bar, leftover food from our time in Arenal. An all-day kayak trip in full sun with no proper food and minimal water? I anticipated an afternoon headache, and had packed Tyelnol. There were countless tiny frogs on that beach, making us fearful to walk. We hesitated with each step, watching frogs scatter before our raised foot. Eventually we climbed back into the boats and continued our journey.

As we neared the huge, broad, fast-moving San Carlos River, Martin was suddenly alert, electrified by a bird call. “Macaws!” he cried, searching the sky. And sure enough, two brilliant and dramatic Scarlet Macaws swooped overhead and landed in the trees across the river. They weren’t the endangered Green Macaws we were so desperate to see, but who can turn up their nose at Scarlet Macaws? They were breath-taking.

Dakota raced ahead in his kayak for a better view. Martin and I were riveted by the birds, glancing now and then at Dakota, far ahead, who was letting his kayak drift sideways once more. His entire attention was focused on the dazzling birds before him, viewing them through his pitiful one-eyed “binocular.”

We heard the splash from afar.

Dakota had drifted broadside into an enormous snag and had flipped the kayak. The water was swift and deep, and Dakota was struggling to turn the kayak upright and haul himself onto it. We paddled furiously over to him as he clawed his way back into the boat.

Amazingly, he still wore his glasses. Luckily, he still had his backpack, safely clipped to his kayak. Inexplicably, his binoculars had not been looped around his neck. They were ejected from his hands when he hit the tree snag, and were now resting quietly somewhere on the bottom of the San Carlos River. No great loss, I guess, since they were only half-functional anyway.

Did Dakota start paying attention? Did he stop drifting carelessly? Uh, that would be, emphatically, “no” and “no.” It’s Dakota we’re talking about here.

Soon after, Martin again shouted, “Macaws!” and this time two Green Macaws flew directly over us, their long, wildly-painted tails beautifully extended. Dakota didn’t need binoculars to see them. Nobody did, they were right overhead. We all just sat in our kayaks and gaped. “Awe-struck” is a good word for the moment.

That’s right about when we saw, with a shock, the first of three huge crocodiles.

The powerful, ten-foot (or more?) prehistoric monster was sunning itself on the muddy riverbank, mouth open, exposing rows of sharp, pointed teeth. Suddenly it moved with surprising speed off the beach and into the river. It floated momentarily on the surface, looking like a harmless bumpy log (much like the snag that Dakota just hit), and then silently submerged, sinking into the murky water. All three crocodiles did exactly that as we passed each individual’s bank: slipped quickly and ominously into the water upon which we were kayaking. Were they hoping someone might flip their kayak? Hoping for a little snack, perhaps?

Seeing those crocodiles had the immediate and dramatic effect of completely eliminating Dakota’s penchant for jumping out of the kayak and cavorting in the river. The guy has some sense!

As the first crocodile disappeared beneath the water, Dakota paddled crazily over to its bank, where he beached his kayak and catapulted out, searching the riverbank up and down for any more signs of crocodile, while we screamed at him to GET BACK IN THE KAYAK.

Our language was way more colorful than that.

It’s one thing to peer into dark holes in the rain forest, searching for fanged creatures, slithering snakes, or hairy monsters. It’s quite another to run up and down a muddy riverbank on a known crocodile beach. A powerful ten-foot long, possibly-man-eating, likely-hungry, probably-bad-tempered crocodile had just left that very bank, with surprising and silent speed.

I bet crocodiles can come back onto a riverbank just as fast as they can leave it.

Screaming at him, we literally watched Dakota come to his senses. One minute he was running joyfully around the crocodile’s recently-vacated beach, the next minute he stood suddenly frozen, as if jolted by electricity. Possibly it was his brain function returning, sending him urgent “Oh shit! Danger!” signals. Then he was sprinting back to the kayak and hastily launching it onto the water.

We can add to his impressive list of outdoor accomplishments: Swam in crocodile-infested waters! Explored crocodile-ridden beaches! Survived!

And so the day wore on and the wind picked up. We found ourselves having to paddle more frequently to make forward progress. We started to feel sunburned, hungry, tired. I got my headache (which was relieved by the Tylenol). Tired and ready to stop, I began actively scanning the river banks as we paddled along – Where, oh where, was our ecolodge? How would we spot it? Were we near? Far? Every curve, every stretch of river looked exactly the same: wide swift water bordered by dense, impenetrable jungle. Would we unwittingly sail right past our take-out site, and end up in Nicaragua? Indeed, had we already gone too far? Would we have to spend the night outside, bitten to death by mosquitoes, hungry and thirsty, wet and cold?

I started practicing Spanish phrases in my head: We’re lost. We need help. We’re hungry. And (embarrassingly): I have my period and I need… something… for it. How do you say tampon or maxipad in Spanish? Worse, how would you act it out?

Think about that for a minute.

But Martin, with his eagle eyes and keen sense of direction, finally pointed to a nondescript and unremarkable section of jungly riverbank, and exclaimed, “There! The ecolodge is there!”

Not that he could actually see it. It was hidden deep within the jungle, up on the hillside, out of sight. Astonishingly, Martin had recognized a single tree, out of the thousands – hundreds of thousands! – that we’d passed that day. He happened to have photographed that particular tree that morning. 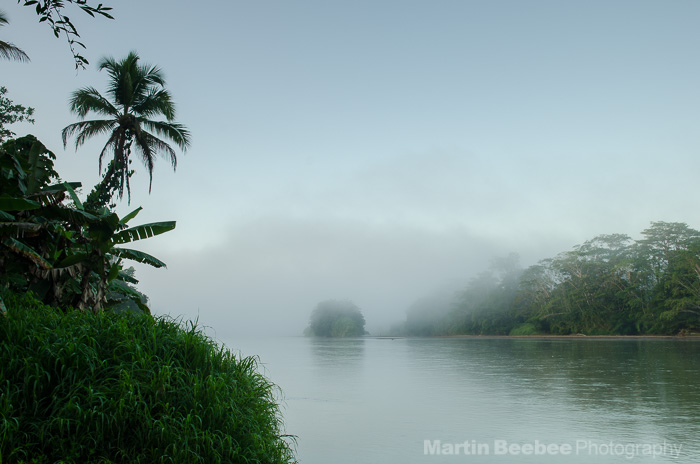 The tree that saved us.

In six hours of kayaking, that one tree alerted him to our haul-out site, thereby avoiding the Nicaraguan border and the need for embarrassing Spanish phrases (not to mention awkward charades) on my part.

I would have missed the tree and totally ended up in Nicaragua. Even Dakota’s legendary neck-hairs hadn’t been singing “Stop, ecolodge ahead!”

And yet there we were, dragging the kayaks up the bank. Marco greeted us, beaming. “I was just thinking it was about time you showed up!”

All of us spend a picture-perfect day kayaking down lovely and obscure rivers in Costa Rica? Check!

All of us see two rare and gloriously-beautiful Green Macaws in the wild? Check!

Dakota survives crocodile encounters, on land and in water, despite his natural instincts? Bonus! 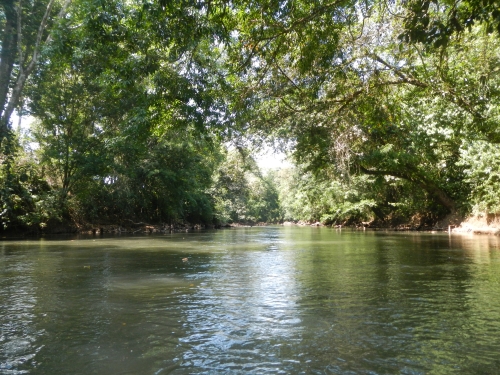 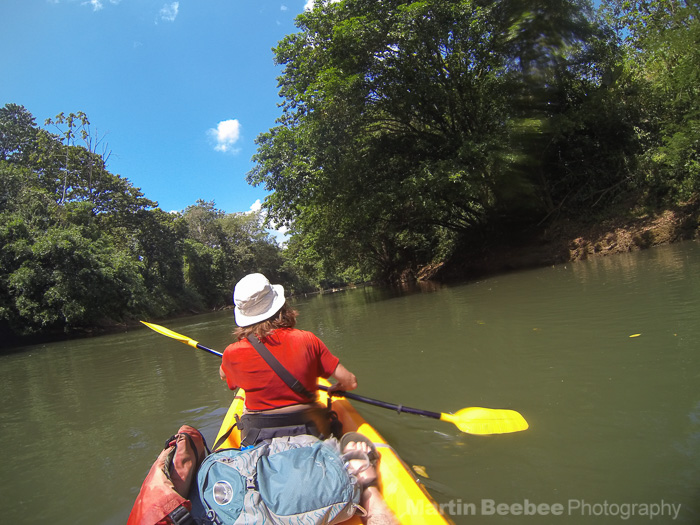 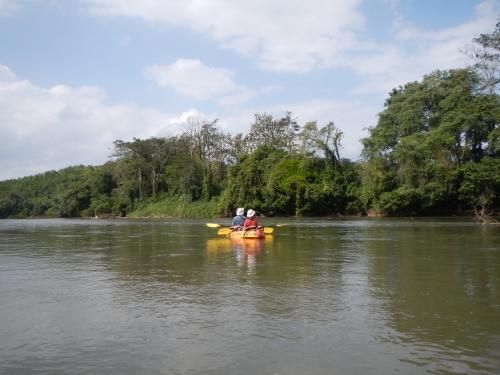 Kayaking with crocodiles. Believe me, they’re under there!