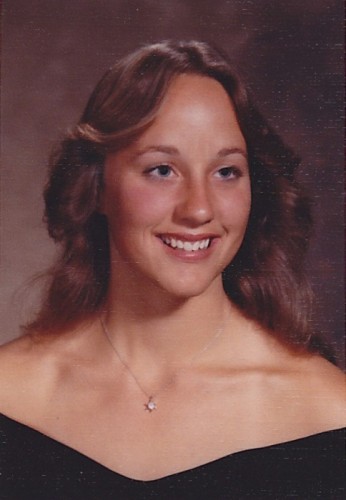 Shoneen is one of those special, irresistible people. With her dancing eyes, generous smile, bubbly personality and genuine sweetness, you love her the instant you meet her. At least, that’s what happened to me – and, as far as I could tell, virtually everyone else we went to school with. Being around Shoneen just makes you happy.

We met at Cunha (“COON-ya”) Junior High School; through eighth grade and high school, we shared our secrets, talked nonstop, and got the giggles. I felt lucky to be among her best friends.

Together we learned that Peppermint Schnapps taste very yummy at the time, make your head oddly woozy soon after, and probably wasn’t worth it the next morning. Hey, maybe Bailey’s and Cream would be different! (It wasn’t.)

Our high school chemistry study sessions invariably turned into chemistry parties. We would meet at one of our houses, ostensibly to grapple with moles and gas pressure and molecular equations, but really to make and eat lots of Snickerdoodle cookies.

Well, dough. The cookies rarely made it to the baking stage.

A typical high school day might find Mr. Connors, our algebra and geometry teacher, at the chalkboard excitedly revealing the secrets of sines, cosines, and 30-60-90 degree triangles. Or he might be earnestly coaching us on how to solve for x by unraveling the rat’s nest equation before us.

He delighted in scribbling those impossibly-tangled equations. We would be unnerved just looking at them.

“Rule number one! Don’t panic!” Mr. Connor would declare, joyously turning towards us. And he would find me sitting conscientiously in my seat in front of Shoneen, her long scarf wrapped around my neck, the scarf then looping around Shoneen’s own neck, and extending back to wrap around our friend Laurel’s neck. The three of us, all sitting perkily in class – pencils up, notebooks open, listening politely and attentively – linked together by Shoneen’s colorful scarf.

It must be tough being a high school teacher.

Shoneen got excellent grades throughout high school, proving her mental acumen beyond doubt. On the other hand, she also joined the high school swim team.

That, right there, calls her wisdom and judgment into question.

Because being on the swim team meant you had to show up, and face people, and publicly compete wearing the team’s swim suit.

A very faint, ethereal wash of orange color on sheer, almost-nonexistent polyester, those suits left very little to the imagination; they were clearly manufactured by the same folks who made the Emperor’s new clothes. The entire team deserved Medals of Honor for getting into the water wearing them.

For getting out of the water, wearing them.

I don’t know about the hours of grueling swim practices and all the competitive swim meets, but the suits themselves surely built a lifetime’s worth of strength and character. As in: Who would knowingly put themselves in the nightmare scenario of being in public with nothing on? You either had to find the considerable courage and self-assurance to appear in public in those things, or quit the team.

Shoneen stuck it out, if you’ll pardon the pun.

And so together we grew up, graduated from high school, and went off to different colleges. We married, found jobs, bought houses. I got dogs; Shoneen had kids. Life gets busy.

We don’t see each other very much anymore. But when we do, we always pick up right where we left off: sharing secrets, talking non-stop, and giggling like a couple of school girls.

Shoneen is my oldest friend.

Shoneen, I have known you for such a long time,
And thinking us over, I find that we rhyme!
We met back in Cunha; our friendship’s still strong –
I’ll attempt here a poem since we’ve been friends so long.
We’ve done much together, so there’s much that I’ll miss
Of the times that we’ve shared – still, let’s both reminisce!

Remember the Peppermint Schnapps that we drank?
Later Bailey’s and Cream! (Moving upward in rank!)
And “Chemistry parties!” What moles, of which gas
Will increase the pressure, but not change the mass?
No, no, I mean volume – or was it the temp?
We were never quite sure what the question quite meant.
Instead we ate Snickerdoodles, and had such a blast –
When Chem was all over, we found that we’d passed!

Algebra – you with your scarf wrapped around
Laurel and me, while we figured and found
Every angle and x Mr. Connor assigned –
“Take the log of the quotient, and graph the cosine!”
We needed those skills to determine the tip
When we took English teachers on a “thank you” lunch trip!
And remember those swim suits the Swim Team all wore?
“They’re just tinted nothing!” you tragically swore.

In college, our paths seemed to go separate ways,
But time nor great distance our friendship can faze.
Whenever we can, we’re together once more
To talk ’til our mouths and our ears are quite sore!
It’s always refreshing – you make me feel great;
When we part, our next meeting I promptly await!
We’ve shared all our secrets, each feeling and thought –
Throughout all these years, never once have we fought.
You’re a wonderful friend; we’re a great lifetime team;
To put it quite clearly: I love you, Shoneen!